This one was a whole thing, y'all. 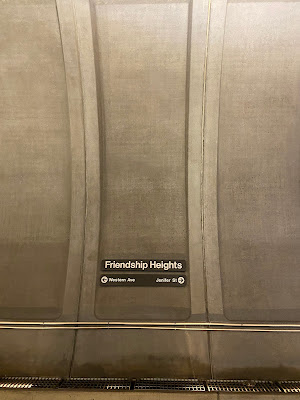 Friendship Heights is on the Red Line about four miles from my house. I had to make it hard though.

I like to actually ride the Metro to or from my end point because I feel as if that is the best way to really experience it. Like, I could have someone drop me off at a Metro station, but that isn't really the same as taking the train to the station. There is, however, no rule that says I have to take the longest fucking route to a station. Yet here we are.

I didn't want to put out my family and have them drive me ten minutes to Bethesda instead of five minutes to Forest Glen, so I decided to ride allllllllll the way around the line. It took a long time.

Friendship Heights is your standard one-platform/two-track station deep under ground.

The station is one of only 11 constructed with "rock tunneling," which is why it is so deep and why the escalator ride takes a full minute and a half to get you up top. Or at least that's what Wikipedia says. I didn't time it. In fact, there are two sets of escalators to the exit I took: One from the platform and one to the street.

There's a mall (read: bathrooms) that you access directly from this space-ship like area or you can go ahead and travel on up to the street.

I was pretty excited about this run because I was taking a straight path from the station down Military Road to Rock Creek Park, where I was going to run the West Ridge Trail down through the park. To do so, I was wearing my brand new trail running shoes, which I purchased for all the fun trail running I was planning.

I have unfortunate information about these shoes -- and the trail -- coming up, but first we have to run up and down Military Road in the dead heat of DC summer into the park. It is here that I will show you the elevation map of this run.

The first mile or so was on the sidewalk and was hot. There was a lot of downhill, but the uphill sections were UP HILL. I was really excited to get to what I was really considering the beginning of my run.

I have sad news for anyone trying out new trail running shoes though. The West Ridge Trail is almost entirely paved. So I didn't really need shoes with stiffer midsoles and better traction. I also have what I have determined is a bunion that was really hurting at the time. It was also 78-million degrees and this run quickly turned into a run/walk.

Eventually my foot was hurting so much that I gave up and called Alex to come pick me up less than a couple of miles from my house. It was really discouraging. I considered returning the shoes immediately, but I've worn them a couple of times on shorter runs since then and they haven't hurt. My bunion (I AM ONE HUNDRED YEARS OLD) has not been hurting as much either, so I'm hanging on to them.

STATS for Run One: 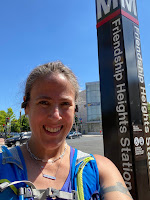 Metro station: Friendship Heights
Line: Red Line
Distance: 4.70 miles
Time: 1:06:43
Pace: 14:11 min/mi
Crow sightings: none
Interesting tidbit: I wore trail shoes because I wanted to run on a trail, but this trail is paved. How much was dirt trail out of the whole thing? About a third of a mile.

I was not about to give up on this station though, so about three weeks later, I headed out again. Having not learned my lesson, I again took the Metro all the way through DC. Fun fact: The weekend I chose had scheduled track work on part of the Red Line, requiring me to get off of the train, take a shuttle bus two stops, then get back on the train to continue my journey.

It was some bullshit.

The whole trip from Forest Glen to Friendship Heights took, like, seventeen hours. I considered running from a different station, but by the time I realized I was going to have to take a shuttle bus, it would have been an 8 or 9 mile run and I wasn't ready for that. It was a whole Thing.

Eventually I arrived at my station, wandered around the shopping center until I found a bathroom, endured some low-key male harassment, and then took off on my run. I knew what I was in for this time though and even though it was still a gajillion degrees, I settled in at a slow run and headed out. It took a lot longer before this run turned into a run/walk. I was doing a really good job for the first few miles, but eventually I just decided to embrace some walk breaks.

Happily I made it the whole way this time. It would have been a bummer if I had to do it a third time. I did learn that I no longer give a shit about being considerate to my family and they can drive me to Bethesda next time I run from a station on the other end of the Red Line "U."

STATS for The Real Run: 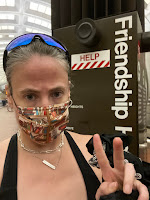 Metro station: Friendship Heights
Line: Red Line
Distance: 6.19 miles
Time: 1:26:55
Pace: 14:02
Crow sightings: none
Interesting tidbit: This was the first time I have ever been forced to take a shuttle bus on a Metro trip.
at 1:44 PM No comments: