(The title is pulled from a Yelp review of this station by what one only assumes is a very tolerant and down-to-earth person. I didn't see her in the station the day I visited so it was, indeed, free of riff-raff.)

When I first moved to the DC area 15 years ago, I thought it was weird that there was no Metro station at the zoo. Instead there were two nearby stations and you had to walk to the zoo from there. Because I had little kids with stubby legs and whiny mouths, I always drove there instead. Hence, I had never been to the Cleveland Park Metro Station before I ran home from there on January 6, 2019.

Both Cleveland Park and the nearby Woodley Park-Zoo/Adams Morgan Station sit near but on opposite sides of the zoo. I did learn, however that not only is Cleveland Park 106 feet closer to the zoo than Woodley Park, but the walk there is downhill.

I tried to look up things that are 106 feet so you could get an idea of much shorter of a walk it is, but I came up with results like, "it's about one-and-three-fifths times as long as a cricket pitch," and "it's about three-fifths as tall as Nelson's Column," and "it's about one-and-seven-tenths times as long as a bowling lane," and I couldn't figure out the math and also what the hell is Nelson's Column and who knows how long a cricket pitch is? Aren't they supposed to compare distances to common objects? I finally discovered that 106 feet is either about half as long as the wingspan of a 747 or twice as long as a semitrailer, so depending on whether you prefer division or multiplication, you can visualize how much shorter the Cleveland Park walk is. That said, you're going to have to walk a half mile to get there regardless and once you're at the zoo, you will have to walk up and down that giant, stupid hill the park is built on anyway.

This station has been in operation since 1981, only five years after Metro started running. Until recently, the escalators there were the same ones that were installed at that time. I know this because the station is in what one would hope is the end-stages of an escalator replacement that started in June 2017, resulting in adventures in staircases.


Cleveland Park Station lets you get to street level on either side of Connecticut Avenue, which is what I ran down (and up and down and up) almost the entire way home. In fact, I ran five miles north on Connecticut Avenue and then took a right turn on Beach. Connecticut Avenue is made up of long, rolling hills and is adjacent to a lot of homes and businesses, which may be why there were approximately 65,000 runners on the sidewalk that day, every single one of them faster than me.

The day I did this run, it was unseasonably gorgeous out. It was in the mid-50's, which pretty much mitigated the headwind I ran into for the first few miles. As much as I complain about being forced to run uphill, I actually really like to run along Connecticut. There's a lot to look at, there is usually space to run around pedestrians, and lots of people take their cute dogs out there. Also, if you need to drop into a store for a bottle of water, there are approximately 67,000 CVS stores on that street.

There are a number of Metro stations all in a line on Connecticut. I'm going to have to get creative to find new, non-Connecticut ways home from them. Stay tuned for that! 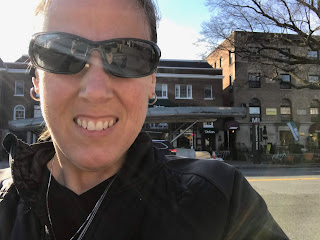