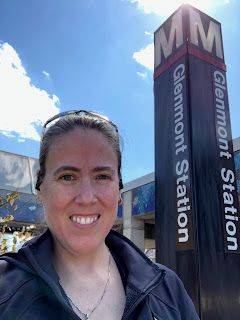 Metro station: Glenmont
Line: Red Line
Distance: 7.51 miles
Time: 2:17:59
Pace: 18:23 min/mi
Crow sightings: None, but I saw vultures and a delightful duck.
Interesting tidbit: I found some fun online reviews for the Glenmont Station, including "staircase smells like pee every time," "fuck the red line!" "you can literally get away with anything on the 3rd floor of the garage," and the super descriptive and very helpful, "farecard machine."
at 5:32 PM