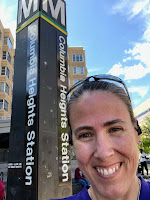 Metro station: Columbia Heights
Line: Green Line and sometimes Yellow Line
Distance: 8.37 miles
Time: 2:03:08
Pace: 14:42 min/mi
Crow sightings: Sniff. None.
Interesting tidbit: There is a Target right next to this station, which meant I could use the bathroom before I started running. Game changer, right there.
at 7:14 PM