Fort Totten Run: Not Quite Far Enough Away

I am currently training for a half marathon, so I am finally running long enough to make it home from Metro stations. In fact, when I arrived at my end point for this run, I still had another mile to run and had to do a little out and back loop after the route I'd planned. My required mileage for this week's long run was 8 miles, so I chose Fort Totten, which turns out to be 7 miles away from my neighborhood. 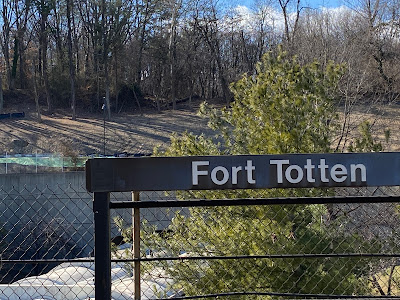 Fort Totten is on my regular commuting route, so I see it a lot. It is also the transfer station closest to my house, so if I am switching Metro lines, this is often where I do it. Ergo, I am very familiar with this station.

That said, I just uncovered a ton of veeeeerrrrrry interesting information. But first, the basics. Fort Totten is a three-story open-air station with the Red Line running through the top and the Green and Yellow Lines running through the bottom. It is the last DC Metro stop before the train enters Maryland.

In 2009, there was a terrible accident when a train headed to Fort Totten during rush hour hit a stopped train in front of it, resulting in nine deaths and at least 80 injuries. There is a memorial plaque in the station, but I have never noticed it, only learning of its existence from the station Wikipedia page. I remember when this accident happened. It was awful.

On my commute, I have watched a the progress of a trail expansion happening at the station. I so badly want to run on that clean, new trail. It looks really exciting.

Before I get into my run, however, here's something interesting: In an article published -- oh shit -- today, it was reported that an unexploded shell discovered in the construction area last summer is -- again, oh shit -- a chemical fucking weapon. I'm not quite sure what that all means, but it seems to be connected to the Spring Valley cleanup, which I am uninformed about, but was apparently undertaken at a site referred to as "the mother of all toxic dumps." Huh. It'll be interesting to see how that shakes out.

My run path was a zigzag north and west, taking me to 16th Street, which I ran out of DC and into Silver Spring.

The path itself was okay. But the thing that was exciting was my elevation graph. Fortunately, I was supposed to be running slow and easy so it wasn't too rough.

There were stairs -- STAIRS -- on my sidewalk route coming into Maryland. Then there was a lot of fun downhill.

Once I realized how close I was to my home, I was a little concerned, because my training plan said I had to run 8 miles and I was sure I was only at 5+. Happily, when I checked my watch, I was actually at 6+, so by the time I got to my neighborhood, I only had to run an extra one mile instead of two. That said, it was incredibly sad to bypass my usual exit point and have to run another half mile out and half mile back.

In addition to Strava, I have the Zombies, Run! app going on my phone during runs, so I have a more detailed map of that last, oh-so-sad mile.

I have a Project Crow run planned for my 9-mile long run next weekend, but I am planning a route of 9.5 miles to make sure I don't have to take that dispiriting mile jog at the end. See you then! 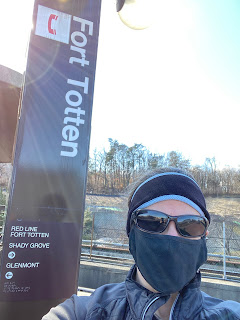 Metro station: Fort Totten
Line: Transfer station for Red, Green, and Yellow Lines
Distance: 8.01 miles
Time: 1:40:28
Pace: 12:32 min/mi
Crow sightings: Two and a half! I saw two crows at my boarding station and I heard a crow on my run but couldn't locate it. So half.
Interesting tidbit: Alex (husband) was also going on a run when I was. We started in radically different spots, we run very different paces, we ran different mileage, and we started out in different directions. The road I was on at mile seven and the road he was on at mile nine intersect with each other and we both hit that intersection at THE EXACT SAME TIME. It was crazy weird.