McPherson Square Run: The Wind Was Angry That Day

There are good runs and bad runs, my friends. This one was a bad run.

I was excited for this one too. I had an easy 10-mile run scheduled for this week and I figured I could run straight up Connecticut from downtown DC to my neighborhood.

"No, it's more of a rolling hills situation," said I, who runs on Connecticut every once in a while.

Let's just let that sink in for a while as we get to know McPherson Square. This Metro station serves the Orange, Silver, and Blue Lines and is located in downtown DC. It is a two-platform indoor station with an excellent viewpoint for photo taking.

It's not a hugely remarkable station in any way other than its proximity to some cool places, but it does have some art on the wall to commemorate veterans.

There was also a pigeon, which I mention because I didn't see any crows, but pigeons, while less smart than crows, are similarly delightful in their scavenging and willingness to hang out near humans.

This station is located near McPherson Square. Which seems obvious, but not everything in city planning in obvious. McPherson Square is named after James B. McPherson, who was a major general in the Union Army during the Civil War.

McPherson Square is similar to lots of other downtown DC park-like blocks. Fun fact: I work right near here!

I took a quick little run tour of the sights and local bathrooms, then headed over to Connecticut Avenue to start my run home. I'd show you a picture of the map, but it's really just a straight orange line.

Anywho, I set off UP Connecticut and soon discovered that the wind advisory put out by the National Weather Service was put out for a reason. That wind was not fucking around and it was right in my face the entire way. It was genuinely A Thing.

I don't know if it was the hills or the wind or I was just tired and burnt out, but this run was grueling for me. I also had a hard time finding my groove because running out of DC involves a lot of stop lights. I was way sad by the time I hit three and a half miles. Mile four was a tough one.

I made it all the way to five miles before I got sad enough to sit on a bench and feel bad about myself and my life choices. During this sit, I watched a metal sign across the street be battered and shook by the wind and I felt devastated for it and myself.

I texted Alex for encouragement, which went unanswered (evidently he has his own life) then decided I should keep going at a slow run with some walk breaks thrown in. I already wasn't going to get ten straight running miles in, so I decided to at least bank some time on my feet. I was also approaching the part of my run that was less extremely uphill.

I pulled my shit together and shuffled up the street again. There was a minor car crash blocking the road at one point, so for two amazing blocks, I was moving faster than the traffic. I was blazing fast! Or not.

Eventually I made it close enough to my house to give up. I had apparently done some wacky pausing of my watch or maybe I paused it a stoplight and forgot to turn it on for a while, but that watch said I only went just over eight miles.

I gave not a single fuck.

I was very proud of myself for pushing through and making it home on my own feets. I figure that every training cycle has at least one terrible run. I'm hoping this one was it for this cycle. There are plenty of Metro stations that can let me run up Connecticut. Maybe I'll try again someday, but for next week I'm going to try running somewhere other than the "rolling hills" of Connecticut Avenue. 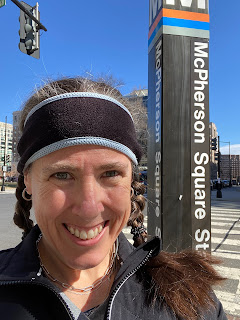