I almost forgot to post this one! I ran it two whole weeks ago. So without further ado, I present to you: Takoma Station!

This is your basic two-track, one-platform station on the Red Line. It was one of the first Metro stations opened in 1976. This station serves both Takoma Park, MD AND the Takoma, DC neighborhood. They're not the same place, something it took me a while to figure out.

The station itself is down a couple of escalators and seems to be pretty much under construction.

I headed off on my run, actually in the opposite direction of home, but there was a dog park a couple of blocks away that I wanted to check out. It was disappointing though because there were only two dogs wandering around.

This is my route map, which shows my path through the park. The dotted part indicates that it is trail, but doesn't differentiate between dirt and asphalt.

I don't do a lot of trail running, largely because it's easier to find a road to run on than a trail, but also because I am prone to tripping on things and I feel as if it would be a lot easier to lose a tooth on a rock or break a shin on a log out there than on a sidewalk.

That said, I might have to do more of it, because good lord it is beautiful out there.

Many of the Rock Creek Park trails converge and dump out at the DC/Maryland line, which is about two or three miles from my house. This trail did as well. The trail turns into asphalt when you enter Maryland and it is much closer to roads and also a route I run so often that I could run it with my eyes closed. You know, if I wasn't likely to trip on the first crack in the trail.

I passed another dog park, but there were no dogs there either. Fortunately, the trail to my house passes a horse stable, so at least I got to see some large mammals.

I also saw these ducks.That's about it. It was a pretty chill little run--one that I could see myself taking again. I do like the elevation map even though it is fairly misleading. That big drop was from the road into the park, and it really wasn't as dramatic as this chart makes it seem. 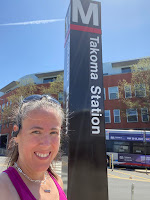 Metro station: Takoma
Line: Red Line
Distance: 6.39 miles
Time: 1:18:26
Pace: 12:16/mi
Crow sightings: One!
Interesting tidbit: I ran into my friend Vickie partway through my run, which not only gave me an excellent opportunity to chat with her, but a nice pause in my run.