I was astonished when I looked at a Metro map a couple of weeks ago and noticed that I hadn't run from Silver Spring yet. Why astonishing? Because it's one of the closest Metro stations to my house and eaaaaasy to run from. So...

This station is pretty standard. There is one platform and two tracks on either side.

The Silver Spring Metro station is adjacent to the Paul S. Sarbanes Transit Center, which is a station for a bunch of buses and trains.

This map shows the location of all the bus stops. It was all very complicated. It is multi-level and was constructed since I've lived in DC, so it's not very old. I remember when it was built and there were some very serious design and construction defects so people made all kinds of jokes about not wanting to stand under it.

The transit station opened in 2015, which was five whole years behind schedule.

In addition to the current public transit offerings, the map indicated that there was a "TRIPS Commuter Store." I figured it was a place where they sold tickets and stuff but I was hopeful that maybe there was some public transit merch I could procure. No such luck.

I'm glad I made the trip up to it though because I passed this oddly stationary pigeon on the steps on the way up and back. I couldn't tell if he was injured or just didn't give a fuck. I'm hoping for the latter.

I don't come to this Metro station often, so I was surprised and amused to find that there is a mural titled Penguin Rush Hour hanging at this station.

But then I turned the corner and was confronted with the rest of this mural, which is actually 100 feet long and I think I might have audibly gasped. I find this to be just about the most delightful public art I have ever seen.

This mural was originally placed at the station in the 1990s and was painted by Sally Callmer Thompson.

In 2004 the mural was removed for restoration by the artist, but it was decided to not put it back until the new transit center was built. 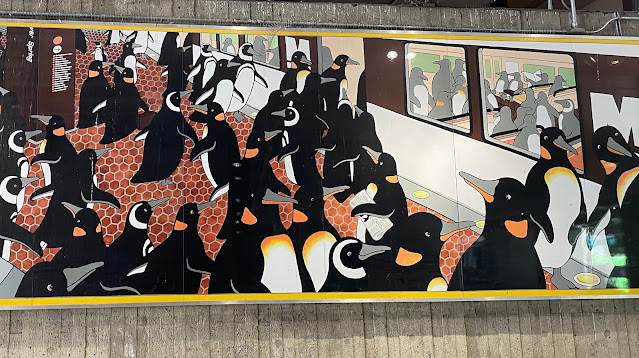 This is actually a digital copy of the mural painted on aluminum sheets for durability and was installed in 2017.

The only flaw I can find in this mural is that there is no angry penguin sitting on the train screaming at the top of his lungs, because that person is ALWAYS on my train car.

Also, they are clearly pre-COVID penguins.

The only other thing I will say about this station is that the transit center signage was excellent.

I don't think I know what "alighting" means. I'm not sure if it means getting on or getting off the bus. *checks the dictionary* Okay. It means to come down from something. So you can't get on -- or *checks the thesaurus* bestride -- the bus from here.

From there I had a very simple run home. I took off westbound down East-West Highway and swung right on Rock Creek Trail when I reached the bottom. 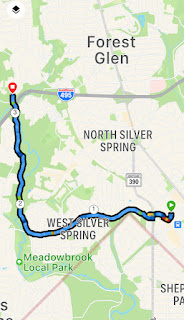 I like running down East-West Highway because there is a lot of downhill.

It was a pretty uneventful run. I'm working on base building this summer, so I am intentionally running slow and not worrying about my time. It was a nice run if not very long. Just as I predicted: eaaaaaasy. 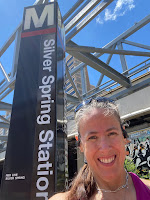 Metro station: Silver Spring
Line: Red
Distance: 3.25 miles
Time: 40 minutes exactly
Pace: 12:18 min/mi
Crow sightings: 0
Interesting tidbit: I now have three kids who can drive by themselves, so even though Alex was out of town when I did this run, I didn't have to hitchhike to the station to start! (Kidding. Don't hitchhike, friends. Stay sexy and don't get murdered.)