Smithsonian Run: I Don't Really Want to Run a Half Marathon

Remember my last run when I said I wouldn't be running Connecticut Avenue again any time soon? Well, just one week later (I did this run a couple of weeks before writing this post), I was back on Connecticut. This time, however, I was running the opposite direction.

That is why I set off from my home on February 26 and ran DOWN Connecticut into DC. My goal: The Smithsonian station.

Before we get there however, I would like to tell you that a mere mile and a half from my home, I found this here crow trying to collect some materials from a construction barrier. My presence and fumbling for my phone camera scared him off the ground into a tree.

Here is my route into DC. It's that long, straight orange line again. 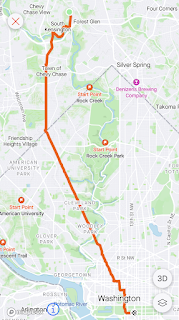 And check it -- my elevation graph was so much more pleasant this time. It was nice to get most of my uphills out of the way in the first few miles. Right at the DC line there is a traffic circle. As I was waiting to cross a street, I ran across a couple with two tiny dogs. "Look at you, champion," the man said, nodding toward my hydration vest, warm morning outfit, and clearly badass running self. That's right, I thought: I AM a champion.

This station is dedicated to Carmen E. Turner, something I learned as I was traveling down into the station. It turns out that she served as General Manager of WMATA in the 80s, when it was named the nation's best public transportation system by the American Public Transit Association. I know. There was a time when people praised Metro. Who woulda thunk it? Ms. Turner was the first Black woman to lead a major public transit agency. She moved on from Metro in 1990 to become Under Secretary of the Smithsonian Institution. What an incredible woman who I'd never heard of and what a very appropriate dedication.

The station itself is a regular ol' two-platform station on the Blue, Orange, and Silver Lines.

This station was built in the 70s after some controversy. The station had been planned, but the National Capital Planning Commission decided that the station entrance near the museums would impinge upon the National Mall view and WMATA very sneakily, without notifying anyone outside of Metro's core planning group, eliminated the entrance, then claimed that since no one had commented on this change, it was aaaaallll good.

The Smithsonian and a couple other organizations formed a strong coalition in favor of the Mall station entrance and WMATA was all, "That's cool, but the money we already said we'd use for this station has now been used for other stations so if you want this thing, you're going to have to raise the funds yourself."

In 1972, after some pretty hard lobbying, Congress passed a law that, among other things, provided almost $8 million for this station entrance (and the Arlington station). And thus it was that I was able to descend the elevators directly from the mall between museums into the Metro.

I spent a couple of miles really cursing out Past Jean and Alex From All Times. But then I got into DC and running in DC is just always really lovely and fun. There is so much to look at and it's mostly flat and my half marathon is in DC, so maybe it won't be so bad.

I took a reverse tour of some of the sights from my last run from McPherson Square, including Black Lives Matter Plaza.

I also stopped for a few minutes to take in a pro-Ukraine demonstration in front of the White House fences. Two weeks later and the situation there just gets worse and worse. It's all so horrifying.

I had never been to this Metro entrance before, at least so far as I can remember, so I wasn't really sure how to find it. Fortunately, the National Mall sign people were there to help me out.

Fun story: I was stopped to take this photo and as I started running again, a passing woman said, "You're doing great, girl!" It was very nice and very encouraging, but I always wonder what it is about me that makes strangers shout encouragement at me. Do I look like I need it that bad? Am I visibly suffering? What is it?

I offer my splits to you here just because they are not as awful as the McPherson run.

I had thought ahead and brought two jackets so I wouldn't be super cold sitting in my sweaty clothes on the way home so I was feeling pretty good as I waited on the platform for my train.

I got on the train and rode it for several stops before I realized that I was headed away from where I wanted to go and had to disembark and wait for a train going the opposite direction.

Here I am passing through the Smithsonian station again on my way back.

I eventually found my way to my transfer station, then back to my Red Line train, and finally to my home station where Alex picked my now shivering ass up. It was a long trip back.

But there you have it! My triumphant return to Connecticut Avenue.