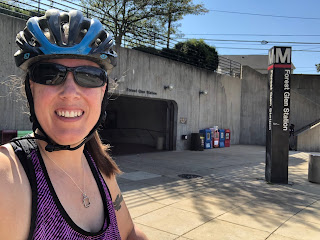 Metro station: Forest Glen
Line: Red Line
Distance: 1.89 miles
Time: 17:20
Pace: 6.5 mph
Crow sightings: Not a damn one.
Interesting tidbit: It actually took me longer to bike this route from Forest Glen than it took me to run a different route from the same station!
at 3:26 PM