I am a little behind on writing this Project Crow report. I ran home from the Georgia Ave-Petworth Station on January 12, 2019, which is—oh dear lord—ten days ago.

This station, serving the green and yellow lines, opened in September 1999 and serves several neighborhoods in the area. I think there is probably a lot going on in this area in terms of development and gentrification, but I am not knowledgeable enough about it to craft a thoughtful essay so instead I'll just tell you that I ran past a cider bar with a children's train table in the window so, you know, the hipsters' babies can play while they booze. (I'm not saying that I wouldn't park my kid there and take advantage of a couple of pints, but running past on a cold Saturday, it cracked me up.)

I think that one of the most interesting things about this station, which is pretty unremarkable otherwise, is that there is some really cool art there, most notably a two-part piece called "Homage to a Community," by Andrew Reid and Carlos Alves.

The main mural is 130 feet long and depicts major events in the neighborhood from Native Americans, featured at the far right of the mural, to modern-day commuters on the end at the left. I looked this up on the WMATA website and the difference in color from when it was new in 2002 to now is shocking.
I wish I'd known about this mural and what it represented prior to walking pretty quickly past it. I imagine it must be kind of neat to commute through that station every day and be able to see different parts of it. Frankly, it's way better than the walls of ads at most stations.

The mural is complemented by a tile piece on a nearby wall that adds a nice touch of color. It's very pretty and brightens up what are usually pretty grim surroundings. Let's be honest here, WMATA hasn't spent a lot of energy making Metro entrances appealing.

There is more art outside in the form of a leaf titled "New Leaf" that was installed in 2007.
So there's the station. Now what about the run? I chose to run the day I did (a Saturday) because snow was in the forecast and I really love running in falling snow. I also knew that if I ran that Sunday, there would be accumulated snow and ice and I'd probably fall and hurt myself, because that is something that I do A LOT.

This run was kind of tough from the get go. It was probably the longest run I've done in a year; at the very least, it was the longest run I've done since my knee injury last March. See, I'm registered for the DC Rock N' Roll Half Marathon this March although I think I might have to bail on it because of a conflict at the same time and the fact that I'm not entirely sure I'll be ready for it. Regardless, I have a training plan and the plan for this weekend said 7 miles, so I found a Metro station 7 miles from my neighborhood to run from without considering any other factors. Oy.

I ran up Georgia from the station to Iowa and then cut across to 16th Street, which I took all the way to East-West Highway in Silver Spring. I started out pretty well, but my knee, which sometimes has a problem with uphills, started twinging a couple of miles in, slowing my already turtle-like pace. I'm a pretty slow runner. I was slow even before my injury, when I usually ran between 11- and 12-minute miles. I'm even slower than that now, but trying to work my way back.

It doesn't really matter which way you run on 16th street because it goes up and down a lot. Some of that was quite a slog. A couple of runners passed me going up one of the uphills and they turned around at the top of the hill and gave me a sympathetic nod and a "good job!" as they passed me on their way back down. I think I mighta looked like I was struggling.

All in all it wasn't bad though. My legs were really tired, but I had some great sections where I felt good. At first I was really hot and stripped off my gloves, headband, and jacket.  Eventually everything but the gloves got put back on. I finished the run pretty wet and chilly.

Once I got to Silver Spring, I turned west on East-West Highway, a road I've run a bunch, but not for a long time. I was prepared for the hills there, but did more shuffling than bounding up them. I was close to the bottom, not far from taking a right onto Rock Creek Trail near Jones Mill Road when I saw my husband, Alex, appear, take a u-turn at the intersection, and go back the way he'd come. I was really excited to see him, but he didn't see me and so I sped up to catch him. The only problem is that he runs significantly faster than me on my best day so I was pretty sure it was a futile acceleration. Fortunately, there is a water fountain about a tenth of a mile in from the intersection where he u-turned and I caught him.
And then he left me in the dust again. But once he got to the bottom of our neighborhood nemesis hill, he turned around and ran back to me. And then he ran back to the bottom of the hill. And then he ran back to me. It was both adorable and demoralizing. But then we got to walk up the hill together. My hip abductors were killing me on that walk. I don't know what activity works abductors so hard, but evidently I did that thing.

A quick stretch and a shower later, however, I felt much better and I was happy to cross my first non-Red Line run off my list. 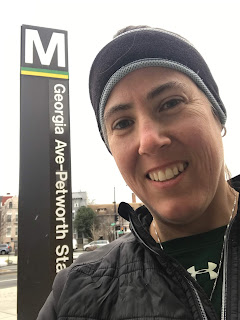 Metro station: Georgia Ave-Petworth
Line: Green and sometimes Yellow
Distance: 6.98 miles
Time: 1:30:58
Pace: 13:02 min/mi
Crow sightings: none
Interesting tidbit: Yellow line trains don't run north to Georgia Ave-Petworth past Mt. Vernon during rush hour, which seems inexplicable, but is really because, past Mt. Vernon, there aren't any "pocket tracks" allowing the trains to move out of the way while turning around to go the other direction. Because of that, it would take too long for trains to turn around at Fort Totten during rush hour, which would cause big gaps between trains.