I wussed out hard this week.

I was going to do a run of five or six miles, but you guys, it is cold out there and I am tired and so I decided to run from Wheaton Station, which is not only super close to me, but almost entirely a downhill run. This is going to cause me trouble when I only have stations that are, like, 20 miles away from me.

Anywho, on January 27, 2019, I ran from Wheaton Station on the Red Line to my neighborhood at a whopping distance of 2.05 miles.

You know the Wheaton Metro Station as "the one with that escalator," or "the one where people get stabbed on the regular," but probably for the escalator. It is hard to get a photo of the Wheaton escalators that really demonstrates how long they are.
These escalators are 230 feet long, which makes them the longest escalators in the Western Hemisphere. It takes about 2 minutes and 45 seconds to take the entire escalator trip if you don't do any walking. I used to commute from this station and it is hard to walk up the whole thing, even when it's helping you out by going up with you. If you want to know how out of shape you are, try to walk up those escalators. Warning: It is extremely demoralizing.

You can always tell regular commuters in the morning by their no-handhold, no-fear jog down the whole thing. I used to do that too and lived in terror that I would trip and plummet to the bottom on sharp escalator steps. Doing it is really a faith-based venture.

There are always parking spaces available at this Metro station, which is nice. Every once in a while when I can't get a spot at Forest Glen, I'll drive here so I can park. It's nice because it's in a garage too, so in bad weather, your car is protected. It's less nice because of the previously mentioned risk of stabbings. Remain vigilant.

The parking garage is across the street from the station, connected by a third-level bridge across Veirs Mill Road.
Parking in the garage usually involves walking up (or down) a stairwell in the parking garage, across the bridge, and then down another stairwell on the station side. There is an elevator, but I've never taken it, partly because it seems to be really, really slow and partly because it seems pretty grim in there.
As I mentioned, this was my home station for a long time because I used to live in Wheaton. All in all, I like this station. I think the escalator adds a lot to the ambiance. Plus, it's right next to Wheaton Plaza, so it's super convenient for any shopping you might need to do.

There's also a fun statue of a commuter here. He's wearing roller skates, as you do when you commute. I read a fun post about how he seems to be skating directly into a garbage can, which is kind of a bummer for him.

If the transit police don't give him a stern talking to about skates in a Metro station, he is going headfirst into the trash.

When I lived in Wheaton, I used to run up Veirs Mill to University, then run down University to Newport Mill. It was my standard, no-frills route when I didn't have the energy to think of someplace else to run. Consequently, I was already very familiar with every part of this trip. The only difference from my old route is that instead of heading back north on Newport Mill, I kept going into Kensington.
There's not a whole lot to say about this run other than it didn't feel as cold as I thought it would. I may take a couple of weeks off from Crow runs because the cold weather makes me really sad. It's been very hard to motivate myself to exercise outside when I have indoor alternatives. Although once I'm out there, it usually feels pretty good. It is a constant battle. 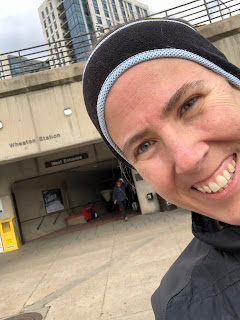 Metro station: Wheaton
Line: Red Line
Distance: 2.05 miles
Time: 23:59
Pace: 11:41 min/mi
Crow sightings: Zero. I'm starting to despair of ever seeing a crow again.
Interesting tidbit: The Wheaton and Forest Glen stations are the only DC Metro stations that have separate tunnels for each direction as opposed to having both sets of tracks on one large, common platform. These two stations are also the system's deepest, which is why they have those separate tunnels, it being cheaper to build it that way.